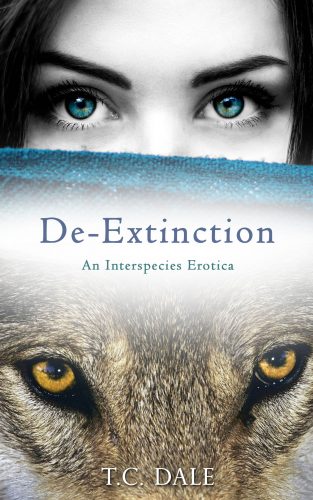 The Dire Wolf Project is alive and well at Primal Life Sciences, and new-hire Michelle Courtney is about to meet the local alpha male!

The pressure of a wet canine nose snapped her attention back to where it belonged, and Michelle gasped. He nuzzled against her mound, snuffling and lapping, each push and press and lick causing her breath catch. She was already wet from fantasy and foreplay. It only took the wolf a second to realize that the deeper he pressed, the more of that delicious smell he found.

Michelle whimpered as the strong, wet tongue curled between her folds. Hot animal breath steamed between her thighs. He lapped at her as he shifted from forefoot to forefoot, his excitement building by the second. She twisted to look over her shoulder; all that was visible was a massive, muscular wall of grey-black fur. His ears were visible, cocked and erect, just above her ass; his muzzle was buried between her legs.