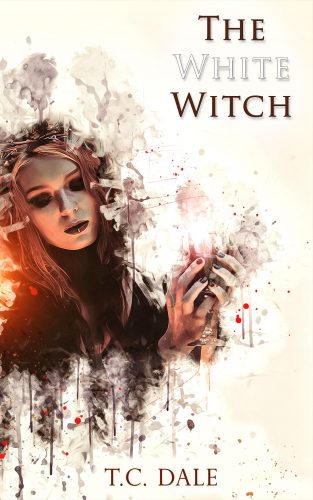 Witch hunter Magdalena has tracked the White Witch of Bassenthwaite over the English countryside. Now she has trapped Lucita in an abandoned mansion -- or has Lucita trapped her instead?

“Shall we tell them I summoned demons to hold you, and then lashed your back to blood?” Lucita whispered.

Again Magdalena twisted in the shadows’ grasps. Traitorous shivers raced down her spine and sparked flames of unnatural want. The scarlet canopy silk had continued its slow ascent up her body, winding around her like the serpent of Eden, and its cool caress now encircled her throat.

“No?” The witch nipped at the hunter’s lower lip. Lena’s sticky-slick honey clung to her nether curls now, and each slow, purposeful, commanding stroke spread it over Lucita’s fingers, and from the woman’s entrance to the buried jewel at the top of her slit. “Perhaps I bound you with bewitched cloth, and watched as the demons made you their whore.”